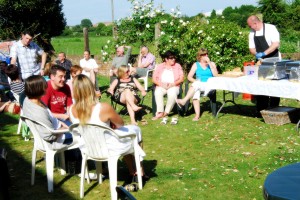 I gave out beautiful food aplenty on Friday with a heavenly hog roast down at the local pub for some football tragics, getting together for a good drink and feed to break in the start of the new football season. The food included some of my personal spitting pig favourites. A spit roast pig was of course included, but accompanying the roast pork sandwich was mini burgers, special skewered feta and a few more finger foods that definitely tickled the fancy of the football-mad fansI cooked the pig, a fairly large one at 40kg, for 4 hours, with all the time on the rotating rendering the natural fat and flavour for a greater texture and an undoubtedly better, more potent spit roast pig taste

The pig even before it was finished transformed the smell of the room, out-muscling the beer-stained carpets and tables and demanding the full attention from everybody there. The atmosphere was rowdy with lots of the famous football banter but that didn’t stop everybody from watching the hog roast like hawks. After a few hours I could feel the folk getting more and more agitated as the intense hog roast smell played havoc with their senses,  fortunately I was saved by the imaginary bell as the hog roast was finally ready to be prepared and I had absolutely no qualms drawing my professional hog roast carving knife and getting to it. Cutting chunks of meaty goodness from the pig, I collected the luscious carvings in the hog roast bowl, ready to be partnered with Spitting Pigs irresistibly crispy crackling.You would have had to have been there to see the faces of the guests when I served the spit pig rolls, to say they were excited would be the understatement of the century. It was as if the football didn’t matter anymore and the only thing worth paying attention to was the hog roast. With the dedicated attention displayed it was only a matter of until the pig was nothing but bone, the meat being consumed in next to no time. I’ve served my fair share of hungry people in my day but none quite as keen as on Friday, I’m just glad that they booked a big enough pig, because I’m sure I’d have been mobbed if not with how much the folks were enjoying it.

Stepping up to the task and coming out on top again, the Spitting Pig name remained one to be revered and respected, and there’s now over a hundred more people who’ll be spreading the word to their friends and colleagues about Spitting Pig