Tim and his fellow artist friends love nothing more than jumping into their van armed with their paints and easels and getting into the great outdoors to paint the inspiring local landscape that surrounds them, whether it be a lake, a mountain or the rolling green hills. The group always paint outdoors, as they feel being close to nature is the best way to get their creative juices flowing! Recently their passion has become much more than a hobby for them all, as their arty exploits have not gone unnoticed, and Tim and his painting pals have now been commissioned by the local tourist board to create a piece for them! They were all bursting with excitement about this new project and decided they needed to celebrate. And as Hog Roast Llandudno also love nothing more than jumping in our van and creating our own masterpieces in the great outdoors, Tim hired us to do the catering!

After some deliberation, Tim and his friends chose a peaceful lakeside setting for the occasion and they couldn’t have picked a better spot. When we arrived, there wasn’t a cloud in the sky and the water was so still it looked like a sheet of glass-or perhaps Tim’s artistic vision was starting to rub off on us! There was no indecision from the group about what they wanted on the menu 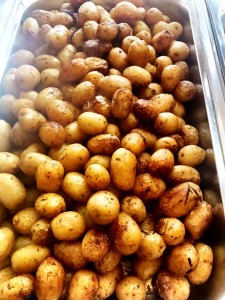 though-a traditional slow roasted hog with all the trimmings, accompanied by a creamy Caesar salad and some seasonal new potatoes! The plan was for the group the spend a few tranquil hours painting and coming up with ideas for their showpiece for the tourist board. Meanwhile the Hog Roast Llandudno chef spent had an equally pleasant time preparing the locally-sourced pork and giving the artists some extra inspiration with its tantalising aroma! As the meat was nearing completion and Tim and his friends had reached a decision about what they were going to paint, our catering assistant got the chance to show off her own artistic skills as she put the finishing touches to the side dishes as they were ready to be served!

We received high praise indeed for our lovingly prepared food and Tim conceded that his group of friends weren’t the only ones who could create art outdoors! Hog Roast Llandudno had a great day cooking for this inspiring bunch and we are looking forward to the unveiling of their new painting!