I had contacted a few other caterers before I contacted Spitting Pig North Wales I was getting married at a rustic venue and wanted something simple. Everyone else wanted to make my menu super fancy and complicated, totally not what I was looking for. Spitting Pig North Wales was just that, simple. She sent me the entire menu, she didn’t push me to do anything differently, and the food was delicious. Not to mention very reasonably priced. I was complimented by all my guests on the food. She really helped make my special day perfect!

The best hog roast I have ever tasted. The meat was succulent and tasty and there was so much of it! The desserts were to die for! All of our guests were super impressed. 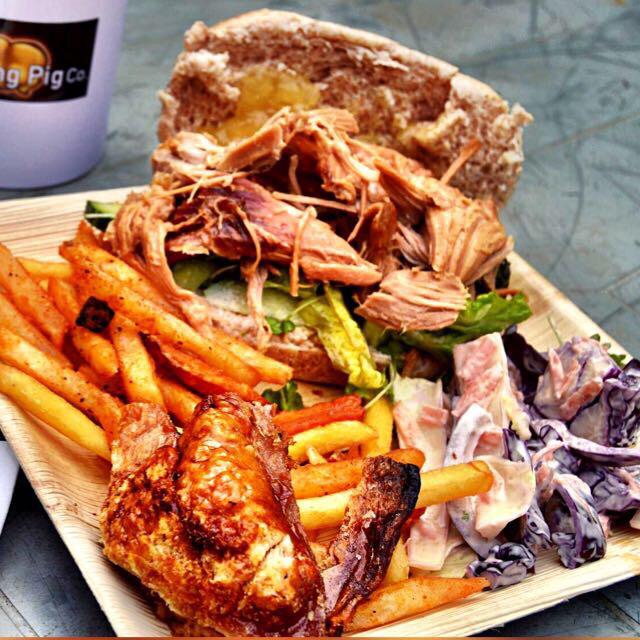 The Spitting Pig catered for a family event we held and every part of the service they provided was professional and completely hassle free.
All of the food cooked by the chef was absolutely delicious and every taste was catered for (even the more fussier family members were happy).

Thank you again Spitting Pig for a fantastic experience.

If you need a caterer then these are your guys. Everything tasted beautifully and the staff were more than helpful right from the start. A great service and highly recommended.

Thanks so much for catering for our party last week. Our original caterers had let us down at very short notice, so we were relieved to find someone else available. The food was delicious, the staff were well turned out, friendly and efficient, tables etc looked very professional, and they left no mess! Perfect!

Dear Sarah,
Our event was a great success, thank you.
We were very pleased indeed with the service from Spitting Pig North Wales.
Diane and her assistant (whose name I have forgotten – sorry) were very pleasant, professional and competent. They arrived when they said they would and were ready to carve the cooked hog at the time we asked for. Everyone was very complimentary about the quality and taste of the meat, which was perfectly cooked.
We would not hesitate to recommend Spitting Pig North Wales, and we hope to use you again in the future.

On behalf of everyone here at Technology Supplies I would like to thank Stephen and everyone at the Spitting Pig Company for helping us host a very enjoyable event. In particular I would like to thank both girls that attended on the day – they were both a pleasure to deal with, the service provided was second to none and they made sure all of our guests were kept happy and well fed. I would have no hesitation in recommending the Spitting Pig Company to anyone thinking of having a Hog Roast at their event in the future.

What can I say about Martin and his lovely wife Diane? In short, they were absolutely fantastic.

From meeting them in March to discuss the menu and go through everything, they put our minds at rest immediately. Warm and friendly, it felt like we had known them for years.

Fast forward to the week of our wedding and we met with Martin and Diane again to finalise the arrangements, again it was like meeting old friends for a coffee. They even put up with my Dad and brother who had travelled up that day and were a little merry for the train journey. My brother is an exceptional chilli head, and Martin promised that he would sort out a chilli sauce for the hog roast baps he would be serving.

Finally the 18th September arrived and things couldn’t have gone better. Martin arrived with his lovely girls at about 10.30am when we were setting up the venue. We were offered the chance to see our pig or ‘Yoda’ as we had named him, and what a pig he was, was a tight fit in that cooker! Martin was amazing and liaised with the venue staff of what he needed and where to place the buffet. The wedding party at this point had to leave, but Martin reassured me that when we returned, we would be in for a treat.

We arrived back at the venue after the ceremony to the delicious aroma – even for a vegetarian like me – of roasted Yoda. It looked simply amazing. More platters were brought out at serving time with mountains of mouth watering Thai, caprese and pasta salad and another huge serving dish of crispy roasted spuds. Then, it was the pig’s time to shine as the cooker was opened, showcasing a perfectly cooked, juicy fleshed and crunchy crackling hog.

The food was just incredible and everyone commented on how moreish and delicious it was. We literally had people raving about the hog and sides all night! My brother, who had previously been promised a chilli sauce worth his while, was certainly not disappointed by Martins offering. We vegetarians were impressed too, with the hearty Mediterranean tart that was on offer – simply lush! Everyone had plenty to eat and were stuffed to the rafters, when Martin and the team put everything left together into foil platters and left them pride of place on the buffet tables, whilst they quietly tidied up and slipped away leaving us to enjoy the rest of the evening.

I simply can’t thank Martin and Diane enough, they are an incredible team and the food was divine, people are still talking about it two weeks later. I have recommended him to anyone that will listen and will certainly instruct his services in future – we have some big birthdays coming up in the next 18 months!

We had a fantastic day at hafod farm on sat and the hog roast was amazing!

They arrived and set themselves up outside as best they could despite the slightly rubbish weather (it was very windy!) They were extremely polite and helpful, whilst also being flexible and understanding about the serving time, we were running a bit later than expected! Everyone commented on how tasty and beautifully cooked the meat was and the portion sizes were very generous!

There were just over 100 people and they served them all quickly but their manner with each guest was warm, friendly and relaxed. We couldn’t recommend them enough! Sooo many people asked us for contact details! A friend of our family who had provided the hot vegetarian dishes for us, used to cater for the army so has done many large events and he was massively impressed with the quality of the hog roast and the cooking techniques involved.

It was one of the best ways to feed a large number of people for a reasonable price and have them all happy and satisfied! An easy, reliable and professional service from booking to eating! And the leftovers have already made amazing cold butties, curry and stew!

Thank you sooooo much!

Just wanted to express my thanks to you and your team for the splendid service at last week’s Plantworx. Having high quality stand hospitality makes a real difference to the overall visitor experience and helped the Cat team create a really welcoming atmosphere. Your team was professional and unflaggingly friendly, even during the inclement weather of Tuesday! How you kept up your energy levels, particularly considering your daily commute from Llangollen, is astounding; pigs may not fly but Spitting Pig is certainly super-charged!

Thank you for all your hard work and I hope to work with you all again soon.

Jo and I wanted to thank you for the amazing job you did at our wedding back in April. It was the first hog roast that we’d had and it lived up to all our expectations, the salads and extra bits and bobs were lovely and the pig was delicious! You really made our day especially being so incredibly efficient, to this day I don’t quite know how you managed to get through so many people in such a tight time frame, something about being professionals I guess…!