You could be forgiven for thinking (as did we!) that bowling is only something your grandad would do. It has a reputation for only attracting gentlemen of a certain age and has always been quite a puzzling pastime for the younger generation. Alan, the head honcho of a local bowling club, was determined to do something to get a wider range of people from his community interested in it and he decided that throwing a party at his bowling club headquarters for the whole village and hiring Hog Roast Llanrwst to do the catering would do the trick!

Alan’s plan was to lure everyone there with the tempting prospect of a free hog roast feast and once he had a willing audience, he would get some of his younger neighbours involved in playing the game and show them that bowling can be a fun and sociable experience. We admired Alan’s determination to broaden the appeal of a hobby he is so passionate about and we agreed with him that one of our hog roasts would be a very effective way of drumming up interest!

Alan opted for one of our classic slow-roasted hogs served with our signature crispy crackling and homemade apple sauce. He wanted a relaxed, crowd-pleasing buffet for the crowd he hoped would turn up! The friendly Hog Roast Llanrwst team, who spent the day at the bowling club preparing the hog roast, reassured Alan that, with a little help from us, his plan was sure to succeed. It turns out he had nothing to worry about, because when 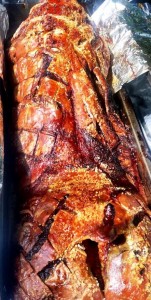 he opened the clubhouse doors, he was inundated with people of all ages, drawn there by curiosity and the tempting aroma of our hog roast! Even if there are more diners at an event than anticipated, our hog roasts go a long way and we always make sure everyone is well-fed and served with a smile. Our buffet hit exactly the right note for Alan; the informal set-up and tasty food got everyone talking and almost everyone who was there was up for giving the bowling a go. Alan was delighted at how many people had taken an interest and enjoyed themselves, including his own grandson and all his friends! Alan succeeded in getting the younger generation interested in the art of bowling and Hog Roast Llanrwst were glad we helped him get people through the door and onto the bowling green!

One Reply to “Hog Roast Llanrwst caters for a Bowling Club”