Saturday 18th October saw us at the beautiful three storey Georgian mansion doing a hog roast at Trevor Hall in the vale of Llangollen which is the village we reside in so didn’t have to travel far. The event was a fortieth birthday party for Nia who lived in  the area and had hired the hall for her special day. The weather was typically autumnal  very windy and wet with us having to hold down the gazebo we were going to serve under any way we could to avoid it becoming airborne. 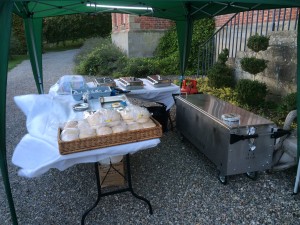 The menu was hog roast Trevor Hall accompanied by salad, homemade coleslaw, tomato and mozzarella with red onion and basil and piping hot herb new potatoes which were received  with much appreciation because of the elements. Elvis (lookalike) was also queuing before everyone hurried inside back to the evenings entertainments which included singing and a fun casino.